Seznam.cz will offer the topic of recommendation systems to users at a workshop

In May this year, Seznam.cz will organize a workshop in English language called “Recommendation Systems and User Representations” at the scientific conference Machine Learning Prague 2022. Participants will learn about the current state of research on recommendation systems, including the deep neural network architectures used in them. The workshop will include a practical part, during which participants will be able to train a deep neural network that they will apply to solve the problem of recommending messages on prepared datasets. The lecture and practical part will then focus on solving selected practical recommendation problems, in particular on solving the “cold start” of the problem using user representation methods.

If you have recently visited any news portal, theme-focused website, or shopped at an e-shop, you may have seen a menu of articles or products that were tagged as “popular articles”, “similar products”, or even “users who bought this product were also interested in these products”. In all cases, these offered items were presented to you by recommendation systems (RS), which are now widely used by online service providers.

Online service offers have grown by more than an order in the last decade, and the number of items (e-shop products, news portal articles, etc.) offered by a single online service can be in the hundreds of thousands to millions. For the average Internet user, choosing from such a large number of products and services has become a very difficult and unpleasant task – an often-cited psychological study dated 2000 concluded, based on well-designed experiments, that too many choices tend to be off-putting. Recommendation systems were designed as a response by technology companies to this situation. A well-designed recommendation system will simplify and streamline the user’s selection of target services and products. This will give the user a positive feeling about using the service, and this will most likely result in more time spent on the service provider’s site, more services, items, or products viewed, and of course the amount of revenues that the service provider records.

The history of recommendation systems dates back to the 1970s, when the first scientific articles on recommendation methods began to appear. The rapid development of RSs and their massive rollout occurred at the beginning of the millennium, at a time when large e-commerce projects were beginning to approach profitability. In the last decade, RS has clearly been dominated by data analytics-based approaches and with them machine learning technologies.

Seznam.cz has been using a recommendation system in its content network since 2016 and has been offering recommendation as the ”Seznam Recommends” service for partner webs since 2019. A case study from 2019 reports a 22% increase in readership of the web after the service was launched.

Another significant impact of the rapid development of RS in the last decade is the ever-increasing demand for IT professionals with expertise in machine learning for application in recommendation systems. For example, a search for job opportunities on the professional network LinkedIn by querying “recommendation technology” returns several hundreds of job opportunities. Seznam.cz offers several positions in this area. 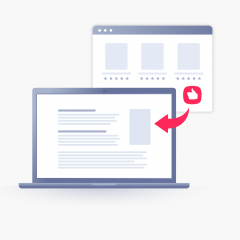 Recommendation Systems for the Second Time: You Will Learn How Their Architecture Is Built

In the  previous blog post, we have pointed out that the modern Recommendation Systems became widespread as they significantly improve user experience of consumers of online services and goods. For the same reason, the RS became subject of advanced research in leading technological companies. In this blog post, we will closely look at how the …